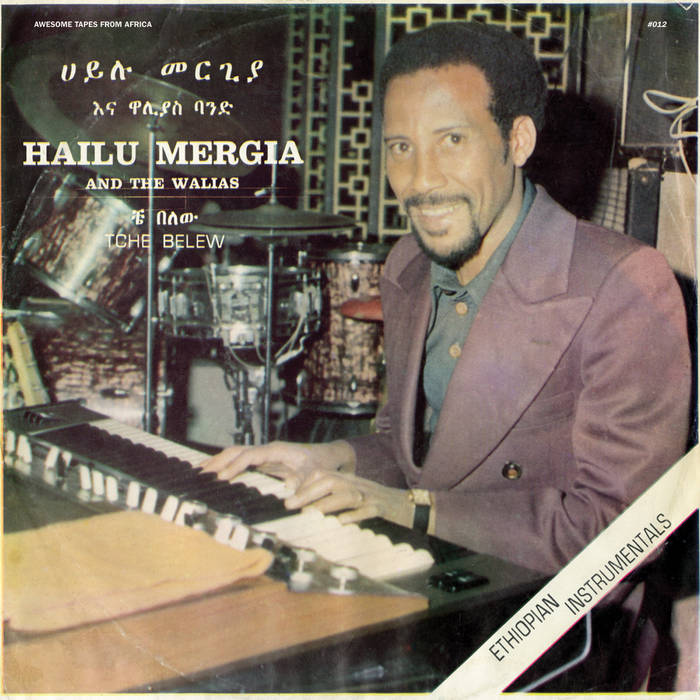 Ayerd Bluhn Is it possible to be cooler than this? What a groove! Favorite track: Musicawi Silt.

Nibblz This album is amazing. Absolutely perfect soundtrack to a backyard get together or some porch time by yourself. Sit back, sip on some iced tea and be one with Hailu Mergia's wonderful music. Favorite track: Yikirta Lemminalehu.

cyberman123 From the first note I knew it was special...mournful,thoughtful & something quite 'of the people'...Political Upheaval anywhere is usually a precursor to good art forms following...now knowing more about this ....I am blessed to share the emotions....As good as any Western Classic....African Soul Jazz from Post Jah 70's...Epic x

Andrew Jervis Amazing spellbinding Ethiopian music, up there with the best of Mulatu (who also plays on this record). Favorite track: Woghenei.

Dozens of cherished recordings were made during the legendary “golden age” of Ethiopian music, an era stretching from the early 1960’s through the mid-1970’s. Less-discussed are the songs made in the aftermath of the 1974 revolution that toppled Emperor Hailu Selassie I. The acclaimed and highly sought-after LP by Hailu Mergia and the Walias, Tche Belew, an album of instrumentals released in 1977, is perhaps the most seminal of these recordings. The story of the Walias band is a critical chapter in Ethiopian popular music, taking place during a period of music industry flux and political complexity in the country.

Hailu Mergia, a keyboardist and arranger diligently working the nightclub scene in Addis Ababa, formed the Walias in the early 1970’s with a core group of musical colleagues assembled from the remnants of prior working bands attached to the Zula and Venus clubs. One of the first “private” bands, the Walias got a steady gig at the prestigious Hilton Addis Ababa and remained independent from the government-supported bands of the time as well as from the clubs who employed bands.

While the oppressive and often brutal, Socialism-inspired Derg government (1974-1987) had a firm grip on Ethiopians following the revolution, Walias organized their own contracts and eschewed government patronage. Unlike the celebrated bands of the run-up to Selassie’s removal—the Police Orchestra, Imperial Bodyguard Band, National Theater Band, Ethiopian Army Band, Hager Fikir Theater Band, City Hall Theatre Folkloric Group and so on—the Wailas developed fame on their own terms and maintained control of their instruments and performances. They played the blues-, funk- and soul-informed tunes Mergia was writing and arranging, while cutting 45rpm recordings released by Kaifa Records with popular vocalists, including Getachew Kassa and Alemayehu Borobor.

After several singles, Mergia decided to do something different: record a full-length album. The band—which at the time featured Moges Habte (saxophone and flute), Mahmmud Aman (guitar), Yohannes Tekola (trumpet), Melake Gabrie (bass guitar), Girma Beyene (piano), Temare Haregu (drums), Abebe Kassa (alto saxophone) and special guest Mulatu Astatke (vibes)—entered Radio Voice of the Gospel studios to record their first long-player. The director of the station knew Mergia personally and connected the band with a sound engineer there. (Incidentally, the Lutheran-owned station was taken over shortly thereafter by the Derg government and used for propaganda purposes.)

Influenced in large part by Jimmy Smith, Mergia and the Walias merged the popular international sounds available in Ethiopia at the time with the traditional tunes that formed the foundation of most musicians’ repertoires. But for this LP, instead of playing the role of backing band, Mergia wanted four of his bandmates to contribute arrangements, so that the album would capture a spectrum of sounds with the instruments and groove positioned out front.

Recording in one large room, the band spent two days laying down the songs, completing several of them in single takes. It was the most professional technical set-up they had used thus far, with modern studio facilities and quality instruments (Mergia was using Farfisa and Godwin organs at the time). Being that this record was predominantly instrumental—extremely rare among Ethiopian LPs—it’s notable that Tche Belew features a backing chorus. Interjecting brief phrases on a few songs, the trio of accomplished vocalists Aster Aweke, Getachew Kassa, and Tegest Abate are the only voices heard on the recording. In the aftermath of the LP’s release, the public’s response was strong and the LP and cassettes sold better than expected.

While the band never travelled outside Addis Ababa, they performed at top hotels and played the presidential palace twice. The Walias’ relationship with the Derg regime was complex though, evidenced by the removal of one song from the record by government censors because it included mention of the previous government. The regime’s broad policy of violence and censorship—including a period called the Red Terror that featured genocide-level disappearances of students, activists and villagers and the indiscriminate imprisonment of journalists—ultimately resulted in half the band staying in the United States following their first tour outside Ethiopia in the early 1980s. Today the musicians remain scattered between Addis Ababa and Washington D.C.

Decades later, Hailu Mergia was surprised to see the album fetching more than $4,000 at online auctions. The Walias had recorded the most famous and wide-reaching of all Ethiopian tunes from that era, “Musicawi Silt,” which was composed by the band's pianist Girma Beyene. Covered by bands from all over the world, “Musicawi Silt” and the rest of this long-awaited reissue have lived on among record collectors and older Ethiopians to this day. Now everyone has the chance to listen again—or for the first time—to this timeless pillar of Ethiopian popular music.