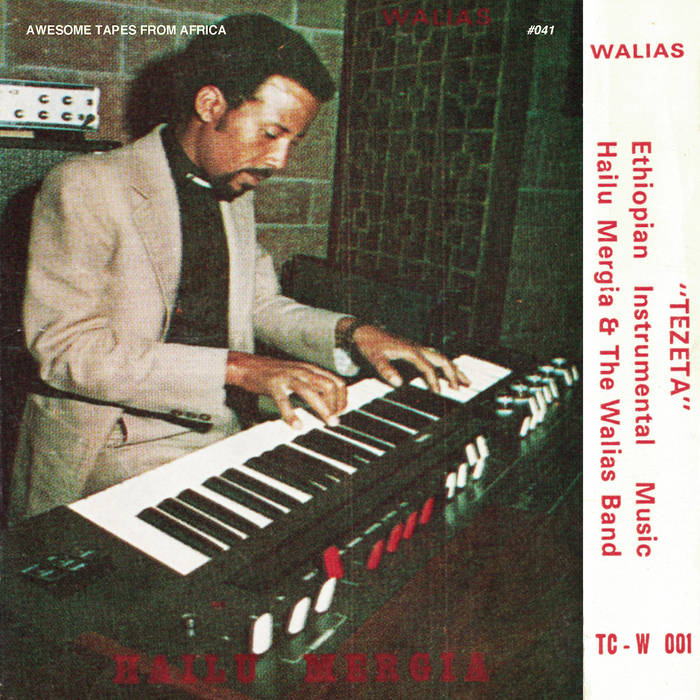 Super Super Sounds Words can not explain how good this is. Hailu Mergia cuts loose with some tasty-as-hell organ playing, backed by none other than Ethiopian legends, The Walias Band. Lovely saturated early 70s tape recording to boot. Killer. Favorite track: Endegena.

From their genesis as members of the Venus club in-house band in the early 70s, The Walias were at the forefront of the musical revolution during an era where modern instruments and foreign styles superseded the traditional fare to become the staple sound of Ethiopia. No one would argue that The Walias were the trailblazing powerhouse of modern Ethiopian music.

They were the first band to form independently without affiliation to a theatre house, a club or a hotel; unprecedented and risky as they had to raise all funding for expenses by themselves including buying equipment. They were the first to release full instrumental albums, considered to be commercially unviable at the time. They opened their own recording studio, with band members Melake Gebre and Mahmoud Aman doubling as technical buffs during sessions. They were also the first independent band to tour abroad. In short, they were the pioneers every band tried to emulate; some more successfully than others.

Their pinnacle came when they took residency at the Hilton Addis- the place to be- and became the go-to backing band for some of the greatest Ethiopian artists. They utilized their strong connections with big names in the industry from their previous incarnations (Most of the group had worked together since their early musical careers, notably as members of Shebelle Hotel band). Tilahun Gessesse, Getachew Kassa, Muluken Melese, Mahmoud Ahmed and Mulatu Astatke were major early collaborators while the band also gave opportunities to up-and-coming vocalists that would dominate the music scene for decades to come. Artists Tsehaye Yohannes, Netsanet Melese, Wubishet Fisseha and Seyoum Gebreyes all made their name after recording with The Walias.

Their 1981 tour of the USA was organized by Amha Eshete of the famed Amha Records, who was in exile and owner of several clubs in the States. Planned in 1979, the tour almost never happened as the military regime in Ethiopia initially refused to issue exit clearance stating the band wasn't allowed to perform in an imperialist country. It took two years of wrangling (and schmoozing) before they finally got permission to go ahead, clandestinely, with band members explicitly warned not to tell their family or friends that they were traveling for a tour. The trip marked the end of the original line-up, as four members elected not to return back home.

Walias released eight instrumental albums to varying degrees of success. In fact, only a couple of those shifted in notable numbers. But, when you're banging out record after record with the greatest voices in the history of Ethiopian music, there's always more than enough to go by and recording those non-vocals becomes pure indulgence for the band. Back then, Ethiopians- almost invariably- termed "instrumentals" as "classical", with an overwhelming consensus that they were merely produced as background music or fillers. Indeed, the only instrumentals made before the Walias were by the Ministry of Information, specifically, for those purposes. They hired session musicians to create and record theme tunes for their radio programs at their Abune Petros studios.

Odds are, any Ethiopian over the age of 35 who had access to TV or radio by the early 90s, will instantly recognize the sound of Walias. What is not a given is, how many would actually identify the band itself. Barely a day went by without hearing the Walias either in the background on radio or as an accompaniment to various programs on TV. Their music was so ubiquitous in media that most of us who enjoyed it never bothered to go out and look for it. Gradually, they started to slip out of public consciousness by the early 90s when newer works by bands such as Roha and Axumite were favored. Only then did those of us feeling a certain sense of loss started inquiring about "that music from TV" at record stores. Yet, most of their work remains stubbornly elusive.

This "Tezeta" album is one of those that have been impossible to find for nearly three decades. Sourced by Awesome Tapes From Africa and expertly remastered by Jessica Thompson, its unique and funky renditions of standards and popular songs of the day are so quintessentially Walias, flavorful and evocative. Hailu's melodic organ, unashamedly front and center in every track, makes even the complex pieces accessible. The stirringly distinct opening riff from "Zengadyw" took me right back to a certain time in my youth. Deliciously vivid, it's a time capsule in and of itself. "Gumegum" is a definite favorite. The vocal version, most popularly sang by the legendary Hirut Bekele, tells of unrequited love - an over-exploited theme in music of the time. "Tezeta" is the traditional anthem of nostalgia that doing a version of it was, for a long time, a rite of passage for any aspiring musician. "Endegena" (To Love Again), is a sleepy ballad by Mahmoud Ahmed getting a zesty uplift here. "Ou-Ou-Ta" is one of the signature songs of the greatest of them all, Tilahun Gessesse.

Profoundly engaging; it's an immersive trip down memory lane for those of us getting reacquainted with it, while also an enthralling and gratifying experience for fresh ears.

Memories of the Addis Ababa Hilton

The cosmopolitan nightlife scene that inhabited Addis Ababa's renowned Hilton hotel was in full swing during the mid-1970s even as political tides had turned in Ethiopia. Hailu Mergia & the Walias Band were the soundtrack to a nightly mingling of diplomats, power-brokers, movie stars and international jazz pioneers, among a litany of others. The band's horns and rhythm section coalesced a sound that mirrored what was happening in the room—a bubbling energy melding elements blown in from around the world. Ethiopian music during this period is among the most compelling the world has ever known—the so-called golden age of popular music spanning the late-60s to the late-70s. What happened at the Hilton with the Walias' sound and its local impact is a crucial piece of music history.

As the brutality of the Derg regime put a near-end to certain kinds of public displays of creativity, Mergia and the Walias were well-positioned to ride out the storm. Love songs were now forbidden and instrumentals were the order of the day. Their songs were pumped out by Ethiopian TV nonstop, so much so that Mergia eventually complained to a producer friend there, wondering why they didn't try playing different songs during the segues and interstitial breaks. In fact, people were calling to request the Walias' instrumentals.

This style of traditional Ethiopian songs reimagined by a pop group in an instrumental format provided the blueprint for Ethiopian instrumental music for decades to come. The soul and ingenuity contained in these early recordings bursts through the tape hiss and other sonic artifacts embedded in the source cassette. The recording itself is hard to find in Ethiopia and unacknowledged by the global fanbase that's grown around the music of this era.

At the Hilton's nightclub, the upper echelons of Addis society partied in isolation from the growing intensity of life for ordinary Ethiopians weathering the political and cultural shift. Luminaries frequented the place—Manu Dibango, Richard Roundtree (while shooting Shaft in Africa), Alice Coltrane (she played a song with the band), Duke Ellington (his band came and jammed with the Walias). That same nightclub became the makeshift laboratory for an idea hatched after Mergia heard the band on a tape-recording from a wedding party. A friend recorded a few songs and Hailu liked what he heard...Why not record an album and release it on cassette?
At the time, tapes were quickly getting more popular. They were duplicated in Athens, Greece, where Ethiopian LPs were also pressed. So after self-releasing and hand-distributing their first untitled five-song tape—which features a quartet instead of full band—Hailu Mergia & the Walias Band recorded its first full-length album, "Tezeta," during off hours at the Hilton.

The cassette-only release came out in 1975 on the band's own label Ethio Sound, which was also a music store they owned and operated collectively. Back then, music stores and sometimes TV and stereo shops also had their own record labels. Theirs was located in Meskel Square, which turned out to be a less-than-ideal location for selling records. They faced a lot of problems since their shop didn't have overseas outposts, unlike their competitors, and they needed to use their earnings from the Hilton gig to pay for records to stock in the shop. It didn't help matters that the band maintained the shop themselves, which was draining and difficult to keep up. They needed to generate income so they produced this tape and sold it themselves. The shop was open for about 3 years and then it was taken over by band member Melake Gebre's wife. The building is still there with a store under a different name, just at the edge of Addis' most bustling intersection.

The hotel's employees and the Walias band members established a social group called Warkaw and hung out frequently. The band had been working at the Hilton for about two years at the time of this recording. A small family grew up around them, encompassing workers from around the massive hotel.

Working as an electrician during those years was Abebe Mesfin, who recalls getting to know the band when they occasionally needed electrical extensions cords or help setting up the sound system in the ballroom. His earliest memory of the Walias Band is when they played "Tezeta" with singer Getachew Kassa, who recorded a few 45s with them. Mesfin bought the "Tezeta" cassette back then and carried it with him to the United States, where he now lives.

Accountant Kidanu Mekonnen, a lifelong fan and massive supporter of Mergia's, met them back in 1970 when they began playing at the Hilton's Harar Grill and during special occasions in the Grand Ballroom. The Walias Band is his favorite because "they took classical Ethiopian music and folk songs and transformed them into modern jazz hits for the organ. Everyone loved Hailu's new renditions of these traditional songs." He says they always played to a packed house.

Another friend from that period, Tedla Gessesse, recalls that not only were Mergia and Walias a great group of people who had a lot of fun with the Warkaw social group, but they were the first people to release Ethiopian instrumental music on a cassette.

The tape first came to our attention via an older gentleman in the Netherlands. He heard about Awesome Tapes From Africa and wanted to contribute a few recordings he brought back from his time in Ethiopia during the mid-70s. Included in that package was a copy of a cassette with only the title "Ethiopie 1976" and the song titles written in Amharic. Mergia instantly recognized it as his early recordings with the Walias—and he also has a copy of his own at home. However, this tape also included the nearly impossible to find first recorded songs by Walias as well. Featuring the band in quartet configuration and only five songs, the hand-written, untitled tape was only available in small quantities. Those songs will hopefully appear on a future Hailu Mergia and the Walias release.